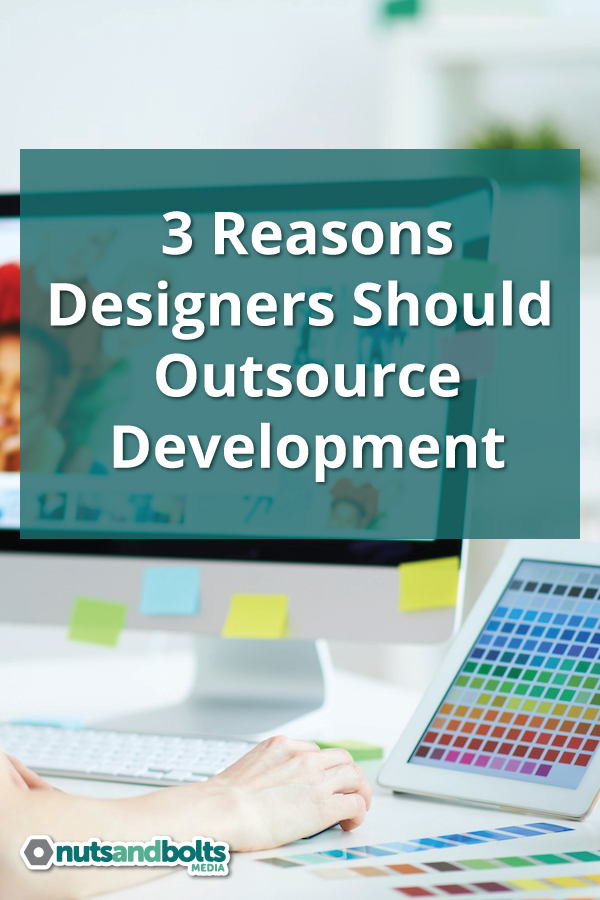 Sometimes it can be difficult to draw the line between web design and web development. As someone who has only recently dared call herself a developer, I’m the first to admit that it’s “easier” (at least on the surface) to call yourself a designer, even if you do dev work as well.

For me, the turning point came earlier this year when I struggled with the design for a project. After several revisions, the client opted to forfeit his deposit and walk away rather than suffer through another round of “Let’s See if This is Closer.” He was frustrated, I was frustrated, and I lost out on what would have been a great addition to my portfolio. You know, if I could have actually completed the work.

It was time to take a good, hard look at myself, my skills, and my business model. At that point, I’d been billing myself out as a “web designer” for 18 years, 2.5 of them full time, yet I hated every moment of the design process. I would procrastinate until the last possible second, then pray the client would be happy and I could sink myself into a code editor where I was more comfortable.

It was time to admit I was working hard, not smart. So I decided to do something about it.

These days, I talk to a lot of designers who can’t wrap their heads around the idea of outsourcing development to someone like me. They’ve been doing it all for so long, the idea of collaborating is totally foreign and scary. I get questions like these:

I had some of those same questions coming from the other side of the equation. But here are three things I’ve learned along the way that will benefit you greatly if you’re considering outsourcing development tasks.

Let’s say your average project is $1500 and takes you a month to complete. You may take on some smaller jobs in the meantime, but you’re basically ending the month with one project finished and $1500 in your pocket.

What if you could take on three projects at $2500 in a month instead, bringing in $1250 for each one after paying a developer? You’d be ending the month with more than double the money, and you wouldn’t spend 50 hours frantically googling or tearing out your hair to get it. Instead, you would hand over each mockup and check that particular site off your list, then move onto the next one.

This is possible for a couple of reasons. First, seeing design and development split into separate line items on a proposal helps your clients understand that there are two distinct processes involved. I have yet to work with a single designer who wasn’t able to raise his/her rates simply by showing clients that design and development are separate entities.

Second, clients will value your work more when they know you are focusing on what you’re best at doing. Don’t believe me? Do you expect to pay more to see a surgeon versus your family doctor? Maybe because the surgeon knows one specific thing really well, while your family doctor knows a little about a lot? Enough said.

2. You’ll learn to refine your processes.

One of the first designers I partnered with (he gave me permission to share this) had zero processes in place for his work. No contract, no deposits, no timelines… I still haven’t figured out how he was paying his bills.

The project we worked on was a blog redesign for one of his existing clients. He paid my full rate upfront to make up for his lack of organization, which helped, but the entire redesign was a disaster. By the time we were finished and the client signed off on the test site, we were both exhausted.

“Is this how all of your projects go?” I asked him.

“Yeah, pretty much. But at least we got paid, right?”

It was time to create some structure. By talking about the things that went well and the things that didn’t, we were able to come up with a far better workflow (including deposits and limits on revisions) that benefited both of us. It’s always easier to make changes when you can confer with someone who’s been in your shoes.

If you are truly a designer at heart – if Pinterest inspiration boards and color palettes and typography thrill your soul – you are likely less excited about things like coding and database optimization. I have yet to partner with a designer who didn’t express relief when s/he stopped struggling with the nerdy stuff. (That’s not to say you can’t be a great designer and also have technical skills, so please don’t send hate mail.)

Sitting on the development side of things, I am SO MUCH LESS STRESSED now that someone else is handing me a design to code. All the details and graphics and flourishes are much easier to appreciate when I’m not the one coming up with them. Not because I absolutely can’t, but because I’m not very good at it. Admitting that for the first time was a great moment for me.

If you love both design and development and want to keep doing both, by all means, do that! But if you find yourself awake at night because of the half-finished site you know must be done tomorrow, outsourcing development can change your life.

Is outsourcing development an option for you?

As you can see, there are definite perks to adjusting your workflow to include help from a developer. However, if you’ve never outsourced before, the process can seem overwhelming.

The most important part of any relationship is trust. When I refer to outsourcing, I don’t mean hiring some random guy off Fiverr – I’m talking about forming a real working partnership with someone who is able to help you help your clients in the most efficient way possible. Two heads are better than one – why do many of us insist on working solo?

If you’re a designer who also does development, what keeps you from outsourcing? Is it lack of trust, or something else? What questions do you have about working with a developer to earn more money, get organized, and achieve more balance in your life? I’d love to hear your thoughts!