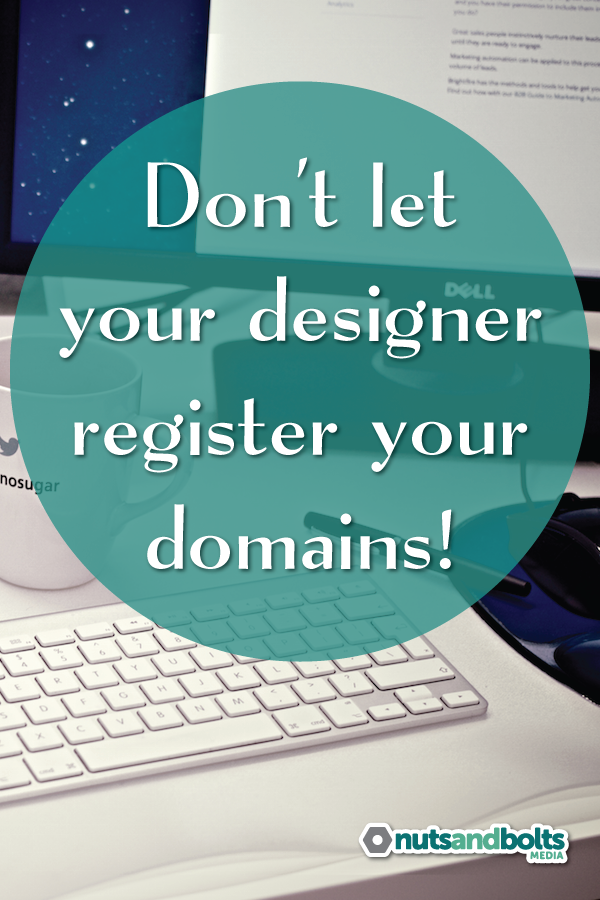 So you want to start a website and you’ve hired a designer to make it look awesome. Congratulations!

But wait – what’s that? Your designer is registering your domain for you? Stop right there. Just as I told you that you should never register a domain with your web host, you should also never allow a designer, developer, or anyone else to register a domain on your behalf. Here are three stories (all based on events that actually happened) that illustrate just a few of the reasons why.

Why You Should NEVER Allow Your Designer to Register Your Domain

Horror Story 1: The Designer Who Passed Away

Once upon a time there was a blogger named Frank. Frank hired Jake from ABC Designs to build him an amazing blog, set up his hosting account, and register his blog’s domain. He was thrilled with the ease of getting started without having to deal with any of the technical stuff himself.

Two years later, Jake (the owner of ABC Designs) died in a car accident. Frank hadn’t heard from Jake in quite awhile and had no idea he’d passed away. When Frank’s domain was up for renewal, the automatic emails went to Jake’s abandoned email inbox. One day Frank woke up and found that his blog no longer worked. After calling and emailing Jake with no response, Frank found out that his domain expired and someone had already snatched it up. According to the domain registrar, there was nothing Frank could do, especially since he didn’t own the domain in the first place.

The lesson: Web designers are not immortal, no matter how much we wish we were. If you have no idea how to log into your website, where it’s hosted, or how to access your domain, you WILL regret it when and if your designer is no longer available to access it for you. Don’t take a chance on losing everything you’ve worked to build in the event that your designer passes away unexpectedly.

Horror Story 2: The Designer Who Held a Grudge

Amanda’s ecommerce site was doing okay. After six months of promoting and advertising, she was finally turning a profit and getting her products out into the world. The only problem was her designer, Matt, who was slow to respond to her support requests and didn’t seem to understand WordPress. Amanda also had concerns about building traffic but Matt brushed her aside, saying her traffic was great.

Amanda purchased a website audit from Nuts and Bolts Media and found out that several issues – permalinks, lack of SEO, and slow load times – were directly affecting her online income. Several other issues on her site needed to be addressed, like the errors customers were getting during checkout. When Amanda emailed Matt for help with the problems, he told her not to worry about it. Amanda decided it was time to fire Matt and get some real help with her site.

Amanda soon realized that firing Matt wouldn’t be as easy as she thought. He had always done everything, so she had no idea how to log into her CPanel or open a new hosting account. Matt also owned Amanda’s domain. She approached him (gently) and let him know that she was ready to move on, and Matt became extremely offended. He refused to give Amanda access to her site, saying she “owed” him for all he’d done for her. Eventually, Amanda had to start a whole new ecommerce site from scratch because she had no way to access her files or domain.

The lesson: No designer wants to lose a client, but some try to “ensure” that by holding their clients’ sites and domains hostage. Before you hire a designer or anyone else to work on your site, make sure you’ll own and be able to access every single part of your site. While it may seem easier to let someone else take care of everything, it can end in disaster.

Horror Story 3: The Designer Who Hijacked Her Client

Joe was in a real bind when he hired Vanessa from Design Interactive. His Blogger website looked awful, it didn’t have the features he wanted, and he didn’t have a clue where to begin fixing it. When Vanessa suggested moving him to WordPress and his own domain, as well as managing his site for a monthly fee, Joe jumped at the chance. He was thrilled with Vanessa’s services!

After a few months, Joe got busy at work and didn’t have much time to maintain his site. He canceled his monthly subscription for Vanessa’s management service after a short email letting her know that he would resume the service at a later date. When Joe returned to his site that fall, he was shocked by what he saw. Not only did his entire website look different, but all his content now had Vanessa’s name on it! Worst of all, Vanessa owned Joe’s domain and he had no way to get it back. He tried emailing her and got no response, leaving him no choice but to abandon his website altogether.

The lesson: Even a designer who seems amazing may not have your best interests at heart, especially if you choose to cancel a service or end your relationship with him or her. You’d be surprised how often things like this happen! No matter how much you trust your designer, dev, or tech support person, you should always have primary access to your content, your domain, and everything else to do with your website. Period.

These stories may seem a little far-fetched or dramatic; after all, do people really steal their clients’ domains or websites? Unfortunately, the answer is yes. Each of the stories above is based on an actual problem one of my clients encountered in the past, and it could happen to you.

Do not allow your designer (or anyone else) to register your domain for you. If you want that person to do it through an account you own, that’s fine. But if someone promises to take care of everything using his/her own domain registration account, you should insist on a different arrangement or run for the hills. If your domain is registered through your designer already, it’s time to transfer it elsewhere before it becomes a problem. Your website and domain may not be physical objects, but they are still assets and need to be protected. Anyone who discourages you from doing so doesn’t have your best interests at heart.