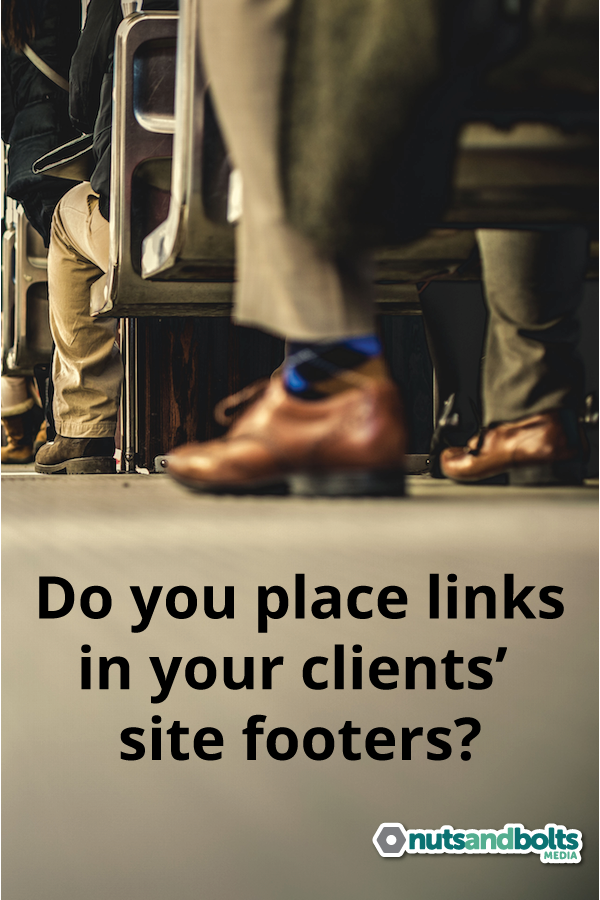 Earlier this week, a lively discussion broke out in the Genesis group on Facebook.

The debate? Whether or not web designers should place a link to their sites in the footer of client websites.

This may seem like a silly thing for people to get worked up about. If you’re a designer, you probably have a firm opinion on this topic already – what’s left to debate? Personally, I found it interesting to see what people do and the reasons behind those decisions. I was also surprised to see how many differing opinions there were within the group.

Footer links are a moot point for my own business since I generally develop white labeled themes for designers. In other words, their clients don’t always know the development is being outsourced, so if any link goes in the footer, it’s the designer’s and not my own. Sometimes I’m asked to place a link to the designer’s site; sometimes I’m not.

Pros of Placing a Footer Link on Client Sites

Visibility. Word of mouth is a great referral source for any designer. If someone likes your work on a client site, it’s easy for them to click through the footer link to take a look at what you have to offer.

SEO (yours). Who doesn’t love backlinks? That can only help you in the long run, right?

It’s the least they can do. You just did a ton of work to create something beautiful and functional. Surely a tiny footer link isn’t too much to ask!

Cons of Placing a Footer Link on Client Sites

Reputation management. What happens if you complete a great design and someone else (the client or a new designer) dismantles it later? Do you really want your name associated with a site that looks like crap?

SEO (theirs). Having sitewide links of any kind could have disastrous effects on SEO. Not always, but it’s still a potential risk.

The client paid you for the work. Once the final invoice is paid, it’s safe to say all parties are satisfied. But does that mean the client is required to tell the world who designed his/her site?

In the interest of full disclosure, I will say that I often placed a nofollow link in site footers when I did direct client work. If clients didn’t want one, I took it out – no problems. A few of them even specifically asked me to put in a link or logo (or, in one case, a whole page describing my services).

So what do you think?

Are designer footer links good or bad? Take the poll below (now closed) and let us know what you think in the comments!