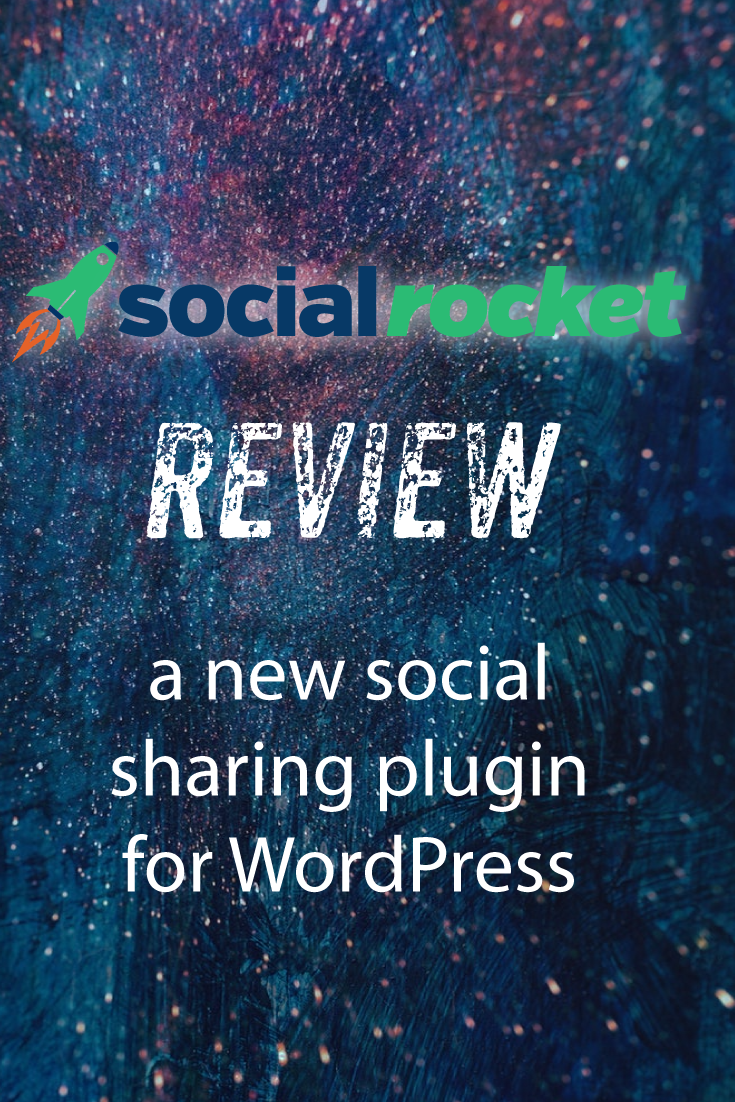 The social sharing plugin scene has been kind of… unfortunate for the past few years.

Between networks shutting down share counts (I’m glaring your way, LinkedIn and Twitter) and every social sharing plugin having problems, I actually haven’t used social buttons here on the site in several months. It just hasn’t been worth it to deal with the headaches of finding a plugin that (1) does what I want and (2) doesn’t suck.

Some of you may remember my love affair with Social Warfare; I used it for years and didn’t even consider any alternatives for a long time. But after reaching my limit of tinkering with broken things (which is pretty high because I tinker with broken things for a living), I decided I would either find something wonderful or have no buttons at all.

Social Rocket is a very new social sharing plugin; it was added to the WordPress plugin repository just last week. But after some time with it, I’ve decided all hope is not lost and sharing doesn’t have to suck. And I don’t say that lightly.

This plugin, y’all… it has ALL THE OPTIONS. All of them. You can customize everything from borders to border radius to space between the buttons to colors of individual buttons. You can make them look absolutely any way you want.

It’s hard for me to even explain the things I like because there are so many of them, so I’ll just make a list:

Heck yes! For the first time, I’m looking at a plugin that has a totally separate screen for mobile buttons, for both floating and inline. I can use different buttons, a different order, different colors, different shapes… and I can choose when the switch from desktop to mobile setting happens.

Most social sharing plugins offer a Click to Tweet option, but they either give you a handful of premade styles (usually ugly) or a custom CSS box – no other options for customization. Social Rocket has a cool style builder where you can change styles, save them, and choose them when you add your Click to Tweet to a post. Check it out:

I’m not using it yet, but Social Rocket Pro has a more button you can use to hide some of your buttons, so they only appear once people click. This site doesn’t really need it but I have several other sites where I have been dying for this feature. I stole a GIF from the Social Rocket site so you can see it in action (click to see it larger)!

I put off moving away from Social Warfare for a long time, both because I loved the product and had hopes things would improve, and because I didn’t want to edit all my posts to add my images, descriptions, etc. all over again. But Social Rocket offers a one-click migration to grab all that information from my site’s database, which worked quickly and flawlessly, so I didn’t have to deal with moving the info myself. The migrator is a separate extension available for $9.

6. Quick responses from the support team.

When I initially installed Social Rocket, I ran into an issue right away – long story short, it was something dumb I’d done in my theme and long forgotten about. I got a fast response from Social Rocket support and they didn’t even laugh at me (at least not to my face) for missing my own mistake.

Social Rocket has a LOT of options and settings, but the documentation is easy to follow and explains all the settings so I can get started quickly. A lot of my initial questions were answered in the docs, which is honestly pretty rare.

I lost all my Social Warfare settings a few times after updating. It wasn’t the end of the world, but it was pretty inconvenient to realize my buttons, colors, etc. were all wrong. Social Rocket avoids this issue by offering backups for your settings and custom images, descriptions, etc. – it makes one automatically prior to each update, but you can also make a backup anytime you want and restore if necessary.

Social Rocket also allows you export/import settings. This is especially handy for me since my site is a multisite network – I set up everything on the main site, then exported and imported into each subsite. No need to set everything up individually when they’re going to be exactly the same.

Social Warfare had a share recovery option, but I had to choose ONE former URL structure and get the shares from that plus my current URLs. However, in eight years of running this site, I’ve made multiple changes and had shares for all of them. Social Rocket’s Share Rescue lets me put in ALL my various URL options and retrieves shares for any and all of them.

Social Rocket has updated once since I installed it, and I was kind of a nervous wreck given my previous experience with social share plugin updates breaking my sites. There was no need to worry, though, because everything went perfectly smoothly, no settings were lost, and the world kept turning.

The Bottom Line: This one’s a winner

I am absolutely obsessed with Social Rocket and I have no qualms about recommending it. I purchased the single site license to try it out, then upgraded to the unlimited license and I’m in the process of installing it on every website I own. I’ll also be installing it for all clients who have been wringing their hands wondering when a better option would come along.

Are there a few things missing? Yep, it’s brand new, after all. But based on the plugin roadmap I think I’ll be even more pleased with it as it gains traction and grows.

If you are looking for an awesome social sharing plugin that does what it says it will do (and does it well), give Social Rocket a try!